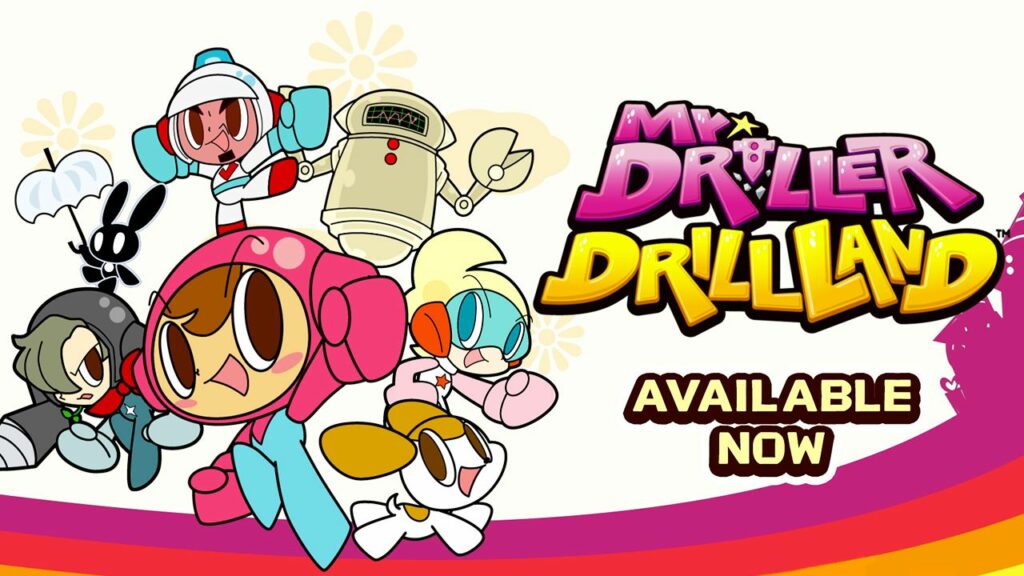 There was a time when the publisher Namco released new games in the Mr. DRILLER series almost every year. Originally created for arcade machines, they were later moved to a variety of consoles, including the Game Boy, Dreamcast, and PlayStation. But not all parts of the series appeared outside of Japan, and one of them – Mr. DRILLER DrillLand for 18 years remained exclusive to the Land of the rising sun. After almost two decades, the company, which has long changed its name to Bandai Namco, decided to fix this flaw and offer the world not an ordinary port, but a remaster of the classic arcade game.

Be careful for your head.

The spirit of Mr. DRILLER is simple: as one of the drillers, we make our way to the bottom of the” glass ” (it makes sense to use terms from Tetris – the game looks somewhat similar), destroying blocks and earning points. The blocks are painted in different colors, and the same stones combine with each other, sometimes forming weird shapes. If you destroy the blocks that served as a support for others, they will begin to fall in a second, putting the hero’s life in danger. When something falls on him, he will either lose one life or lose part of his health – it all depends on the conditions.

In order not to offer a boring list of modes, as it is often done in arcade games, the creators of DrillLand implemented the idea of an amusement Park. The main characters enter the world’s first underground theme Park and participate in its opening – then you choose the difficulty level at the entrance (for beginners or for those who want to return to 2002), and then go to have fun. From the very beginning, they have five rides available to them, which keep the main idea of Mr. DRILLER, but there are unique conditions that force them to approach each of them in a special way.

The attraction of “Drill Land World tour” against the background of the others looks the least complicated – while the hero is trying to break through to the bottom, his supply of air runs out, and we not only have to watch for blocks that are falling on his head, but also pick up air capsules. When the air runs out, one of your lifes is taken. “Star driller” does not differ much in the rules, but there are question marks added to the usual blocks, which either simplify the task, or make it a little more difficult – to move to the very beginning of the level, for example, is not very pleasant, but sometimes it is worth taking a risk.

In the “Horror Night House ” conditions become more complicated – the character finds himself in a cursed mansion and must take 20 crystals from the ghosts, collecting Holy water. When the water is used, the ghosts freeze for a while – you should destroy the areas where they hang with a drill. With each floor, the required number of crystals increases, and because of the bats that take away health points, you have to look for healing capsules. This attraction is as exciting as the “Chronicles of Burry”, where we collect statues and try not to take damage from spines, fire and rolling boulders.

The most interesting tests appear in the “The Hole of Druaga”, where the hero is sent to a maze under the castle for the sake of killing a monster and saving a temple attendant. Points of life are taken away with each use of the drill, and the mines may have several exits (you need to dig not only down, but sometimes the door is somewhere on the left or right), and at the end you have to meet with the Boss. Collectible items are sent to inventory and can be used to gain advantages: one restores health, another allows you to jump on two blocks standing on top of each other, the third gives the character protection when something falls on his head…

A Park that is difficult to leave.

Whatever attraction you choose, you get great pleasure from DrillLand. It seems to be a simple gameplay, but it becomes obvious why the series has lived so long in its time – it is fascinating to drill and watch how the blocks that have lost their support fall on each other and are automatically destroyed when combining the same colors. And changing conditions depending on the attraction make a variety – in the same “Chronicles of Burry” you cant mindlessly dill blocks as in the “World drill tour”, because rolling boulders in all directions do not give rest. And you will not be able to completely ignore them – you will not be able to pick up the statues that you need to pass.

Each attraction has more complex versions, in which there are more dangers, and in them it is especially interesting to fight for the first places in the online leaderboard. Only those who have never used any help can get there. For points earned during the game, in a local store, you can buy bonuses that simplify the gameplay – with one passage you start with protection, with another the number of” lives ” increases to five, with the third you can recover faster than usual when you pick up capsules. But the videos before the start of rides and after their passage seem useless – jokes sometimes skip normal, but there is very little sense in the dialogues between the characters. But these videos, apparently, were completely redrawn and look much clearer than in the original. DrillLand is unlike the game that was released almost two decades ago – you never get the feeling that you are going through some old stuff with the GameCube. The only thing that indicates this fact is the presence of background images on the sides during gameplay, but they do not distract and could easily pass for a design idea if the game was first released this year. Well, the soundtrack, it seems, only got better over time – you want to include these awesome songs in the background when you have to distract from the game.

***
Mr. DRILLER DrillLand is an excellent arcade puzzle game that allows you to spend (or kill?!) your free time and makes you want to return to it from time to time. Of course, the Switch is best played due to its lightweight and portability, but on other platforms it will be no less difficult to break away from it than from some Tetris Effect. Especially in local multiplayer, where players compete against each other in split-screen mode. The republish was successful, and over the past 18 years DrillLand has not lost its advantages.

Pros: exciting gameplay with clear moves; several rides (modes) with additional rules; collectible items allow you to better understand the universe; excellent visual style, which has not lost its charm in the new version; a great soundtrack.

Cons: the videos are cute, but do not carry any semantic load; competitive online mode would fit perfectly here, but it does not exist.

You can also spend the available money on a set of cards to fill in the local collection. This is just an additional motive to return to DrillLand – the cards depict the most characters from The Mr. Driller universe with detailed descriptions and even biographies. Although this is an arcade puzzle, you read these texts with some interest – it’s not often that games of this genre have such a rich backstory.