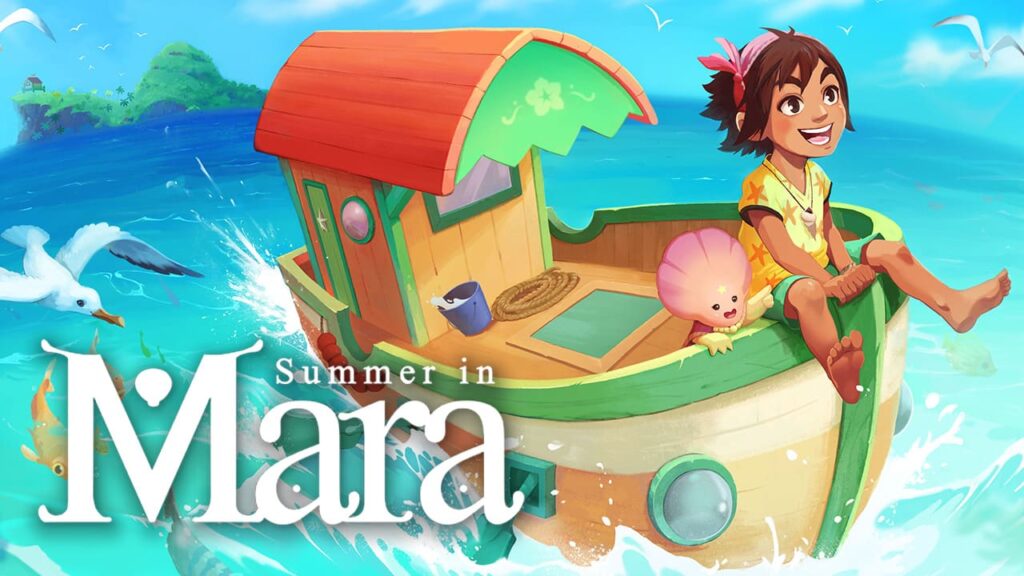 While the borders of countries are closed due to the pandemic, go on a summer vacation and take your heart out only in video games. Summer in Mara was released very handy, as the creators say, “summer adventure” is designed to raise the mood of players with bright colors and a cozy atmosphere of the earth, where strange creatures live.

In the role of a girl named Koa, we can say that we explore the world around us. Aunt Haku, who saved the heroine when she was a baby, teaches us basic things like creating tools, cutting trees, gathering crops, and much more. After teaching, she stops leading us by the hand – we are free to get into the boat (after fixing it, of course) and go to the next location, where life is raging. If on our native island you can meet almost no one, then there is a whole village with shops, a market and a bunch of residents.

The game starts promisingly: here you can create items, collect resources and grow fruits, vegetables, and all kinds of crops. Dialogues seem to have no end; quests appear one after another. When the second island opens, all of this become even more: the list of tasks constantly increases, Koa learns dozens of new recipes, and then you can travel to other places-not so busy, but still necessary to get resources and complete tasks.

However, very quickly you begin to understand that in trying to cram into the game as much as possible, the developers did not bring anything to mind. For example, the process of growing something in the garden near the house is ridiculously ancient. Here you don’t even need to water anything, although this option is available. Above the garden-beds is written how many days you need to wait until harvest, and with the help of water, you can reduce this number by one. But you can’t do this, because it doesn’t matter whether you sleep three times in a row in your house or four, everything will grow up without water.

It is unclear, why in the Summer in Mara they added stamina and appetite. Apparently, it was made for so, that the oranges and berries, collected on the island, don’t just lie in the inventory, but are periodically eaten. Koa loses energy after any action, whether it’s mining minerals or just running around the location. The scale does not empty too quickly, but still irritates with its presence and the need to once again get into the inventory. And since there is a dynamic change of the time of day, at midnight the heroine becomes very tired and passes out right on the move, waking up next time near the boat and forcing you to run back again.

A girl on the expedition

The most serious problems are related to quests. In the description of the game is written that there are about three hundred tasks, but when you realize that they all offer to do the same things, it does not seem worth to do. In this universe, you always need to bring something: either buy it in a store, or grow it in your own garden, or create it in a workshop. The most annoying thing is that for many tasks you don’t get rewards, and even if you get, they are so insignificant that it don’t cause emotions. It would seem that such a bright fun game with funny characters should cheer you up, but everything happens exactly the opposite, and you get tired of it very quickly because of the meaninglessness of what is happening.

Quests are designed in that way, as if the developers did not think that anyone else would try to pass this game. You are simply put in front of the fact: such a character needs such a thing. Where can I get it? How do I find a recipe? Where does this hero live? Maybe you took a task from him so long ago, that you have already forgotten about his existence. There is a map of the village, but it never points out where the main character is, so you have to remember the location of objects yourself. Sometimes you can’t get quest items until you complete a small task, that didn’t seem very important.

The gameplay turns into a terrible routine also because you can create items and cook food exclusively on the starting island. There are no other workshops, so when you receive a task in the village (for example, you are asked to make juice or grow something), you must get on the boat, turn it around and swim in the opposite direction, then run from the beach to the house… And then go back and pass the quest, spending a lot of time. Another unpleasant feature is that the recipes are also shown only in the workshop, so the ingredients that are needed can be found only there. So strange and difficult system, as if the authors tried to stretch the passage on purpose.

The list of elements, that you can find fault with, is very large, and more offensive is that authors clearly tried to create a really cozy universe with cute characters. A way how their portraits are drawn in the dialogues, how each of them differs in character — here we can’t find fault to the developers. The graphics itself is not catching enough stars from the sky and the animation is very ordinary, but the game would be much better if other parts have been made at least well.

During the passage, you constantly catch yourself in mind, that you are wasting time. There is no even elementary research of locations here — everything lies on the surface, and the collected apples and berries reappear after a few days and wait for you to collect them again, making you mad. There are deposits and plants that can’t be collected without a better hammer and hoe, but the desire to quickly pass the story and get strong tools does not arise — the process will not change in any way. Add here a difficult interface, bugs, and sometimes an insufficient camera (in some episodes, it moves somewhere underground and spends all the dialogue there), and you get a game that is very close to the “garbage” rating, but it isn’t so — it still has a chance to become something normal.

Summer in Mara, apparently, turned out to be too determined for developers. They wanted as to tell a story, so to collect resources with the creation of items to offer, and growing fruits and vegetables did not forget. It turned out to be a boring, uninteresting game, full of repetitve quests and inconvenient mechanics (did really no one think, that making you return to your native island every time to visit the workshop is a bad idea?). Patches can fix some shortcomings (for example, make the boat more useful), but this won’t make the game funnier.

Disadvantage: monotonous, boring quests; constant necessity to return to the native island, where the workshop is located; clumsy interface, which is as if they even didn’t try to put it in order; almost no reward for completing tasks, so there is little sense in what is happening; a lot of mechanics, but none is brought to mind.